We interview Thomas Ha, author of “Horangi” in the Noir Fire anthology. 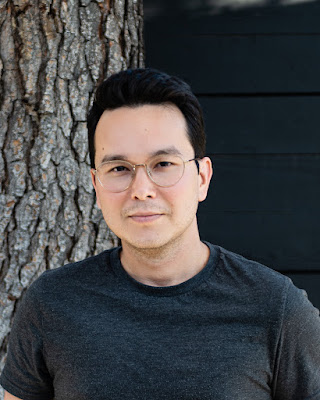 TFF: What does “Horangi” mean to you?

Thomas Ha: There are several themes that drew me to write “Horangi,” but I think the core of the story is about the tension between how others view us and how we view ourselves. As someone who’s mixed race, I think there’s something unsettling that you learn from a very young age: who you are can feel like it depends on the perception of the person looking at you. I think I’ve heard someone compare it to living like an optical illusion, like the Rubin’s vase. When someone looks at me, do they see a vessel? Or do they focus on the surrounding space and see two faces? Am I Asian when I navigate certain contexts and situations? Or am I something else? I don’t always know, even now, as an adult. And as multicultural families and individuals have grown more common over recent generations, I think that’s something you hear or read about more often—a shared experience, that inability to control one’s own identity.

As I’ve gotten older, though, I’ve also become more interested in how that tension generalizes to others’ experiences too, beyond race. The grandfather in this story, for example, the Horangi, who is (very, very loosely) based on my grandfather—he experiences this kind of identity disconnect in his own way. The grandfather is the ultimate liminal being (and yes I know writers overuse the word “liminal” but I think it truly applies here). He bridges a world of folklore and the mundane; the culture of his home country and the states; the high class he once served and the low class he lives in afterward. So while the grandson character is going through a sort of childish, simplistic identity crisis—trying to prove his “Koreanness” to strangers at every turn, hyper sensitive to whether he “fits” in with his Korean family—the grandfather is navigating a similar, if not more complex challenge with multiple dimensions to it.

And in that context, what I like about the grandfather, and what I think the heart of the story is about, is his certainty of self. Despite what others see in him, he says with his words and his actions: “I am not an animal. I am not a criminal. I am a man who loves his family, and that is what I will be, your expectations be damned.” And I admire that in him.

TFF: Korean folklore obviously plays a large role in “Horangi.” What was your thought process in using that folklore here?

TH: I really wanted to use the Tiger, Horangi, for this particular story, because he’s a fascinating figure in Korean myth. Most often, he’s a violent threat or a temperamental fool, the villain really of numerous fables. On the flipside, there are also smaller stories and folktales where the Tiger is regarded as a powerful protector, someone who rewards humans for their loyalty, filial piety, and adherence to Confucian values. Likewise, in certain forms of art (minhwa), he’s simultaneously powerful and associated with aristocracy, but he’s also depicted as dumb and kind of goofy. He’s a complicated character and varies in his role depending on the tale and the context.

The Tiger’s also unique in that there are both themes of failure and striving for humanity in his stories that you don’t necessarily see with other characters. Whether in the founding myth of Korea (Dangun) or smaller fables (Horangi Hyungnim), there’s an element of the Tiger striving to emulate human characteristics and often coming up short. I have a soft spot for characters like these. The ones that try and don’t succeed. Part of why I wrote this story was to wonder a little, what would a character like that be like if he managed to become human in some form? How would he look back on his misdeeds, his mistakes, and how would he try to live his life if given more freedom in a new life?

TFF: In what ways do you view “Horangi” as a noir story?

TH: It’s funny. Even before the call for this anthology, when this piece was originally printed, I very much thought of this as a noir. I very consciously molded the Horangi in the vein of someone like a Philip Marlowe. Someone who’s lived a complicated life and navigates numerous worlds because of his experiences. There are echoes of other noir archetypes in the other characters as well—the Yongs are very much the guarded, high-class clients with secrets to hide. Kkachi and Tokki are like the info brokers and underworld characters who guide the detectives through different societal layers. And Mr. Kim is a combination of the hench-threat and victim—someone who is both a danger to others but vulnerable himself.

But most of all, I think of this as a noir because of the Hawai’i setting. Noir has a complicated history, but in cinema and literature, arguably has heavy, foundational ties with Los Angeles. And in noir fiction, LA is very much a city of contrasts. Much like the light and dark noir is famous for, early LA noir showcases a lot of glamour and opulence, as well as a parallel world of exploitation, economic extraction, and racial violence.

I think much of that is true of where I grew up in Honolulu as well. Yes, it’s a beautiful tourist destination with pristine nature, a melting pot of cultures, and a unique place to have called home. But it’s also the site of an illegal overthrow of a kingdom, foreign occupation, colonization, and militarization. I think there’s a whole category of Hawai’i noir that has yet to be explored about what lies beneath the surface that visitors perceive. The poisoning of resources (quite literally in the case of leakages of military storage tanks in Red Hill, most recently), the islands’ place as a node in the trans-Pacific crystal meth trade, the class and labor struggles that stretch back to the days of the sugar plantations. It’s a different gloss maybe, but at its core, that, to me, is noir.

One strain of “Horangi” that I didn’t manage to fit into this story, for example, is how Koreans themselves only recently freed themselves from Japanese occupation in the early 20th century, only to emigrate to Hawai’i and participate in the colonization of another society. I’m not sure that’s something my grandparents’ generation fully appreciated in the 70s and 80s. They thought of themselves as just moving to America. But it’s a complicated issue that I think more Koreans are coming to terms with in subsequent decades. That kind of dynamic between minority groups, cultures, economic classes, again, I think of that all as a driving force in noir fiction. I may not be the right writer to tell some of those stories, but I do hope that’s something future writers explore.

TFF: What are you working on now?

TH: I most recently had a science-fantasy story in Beneath Ceaseless Skies about a mother and son hunting alien con men, “To People Who’d Never Known Good.” Oddly enough, it might be that my most personal “diaspora” story besides “Horangi,” despite not having anything to do with my Korean background. I also have reprints coming out later this year: “Balloon Season” (originally in Fusion Fragment) coming out in PseudoPod and “The Liminal Men” (originally in Dark Matter Magazine) coming out in Fusion Fragment. After that, who knows what the future holds, but hopefully more short fiction soon!