Mini-interview with Valeria Vitale, editor of the Noir Fire anthology 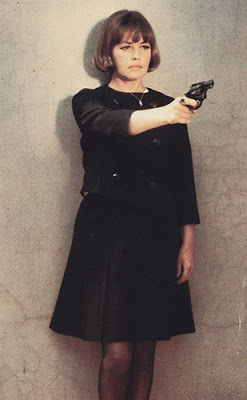 TFF: Where did the idea from this anthology come from?

Valeria Vitale: I have always been attracted to the Noir genre, starting with the movies from the golden age of Hollywood. I liked the witty dialogue and, in general, the heavy literary influence many of these stories had. But what I look for in a story has changed a lot over the years, and some of those beloved classics now feel hard to watch or read: rampant misogyny, not-so-veiled racism, homophobia, ableism, exoticism and, really, any of the worst “isms” you can think of. And yet I still felt a deep connection to the genre, to its ability to look  the abyss in the eye and still re-emerge with the will to fight one more time. So I joined forces with Djibril and we decided that the world deserves better noir! That we can have stories that are bleak but beautiful and that don’t thrive on demeaning stereotypes but, on the contrary, show that progressive noir is not only possible but truly blossoming.

TFF: Is noir a natural partner of speculative and other “genre” fiction, or is this a deliberately discordant marriage of themes?

VV: A bit of both, maybe. There are some obvious matches, like noir and cyberpunk, that have so much in common that is sometimes hard to really apply labels. But I tend to like more experimental contaminations. Some are quite entertaining especially as noir, being so full of clichés, is also one of the most parodied genres. But other cross-genre stories are simply so graceful and they just… work so well that reading them becomes a special treat. You can surely find some neat examples in our anthology, if you’re curious!

TFF: If you could enter a film or novel, which one would you choose?

VV: I tend to like noir, horror and gothic stories but, honestly, I wouldn't really want to live in any of those settings! What I have sometimes dreamed of was entering in a fantasy world, where I can learn to fight with magic, build animated maps and have a talking animal companion that is clearly smarter than me. I would like to do something heroic, something that can, literally, save the world. Or die trying!

TFF: What is the shortest story you like to retell?

VV: I haven’t read it yet! But it will be the micro story that will win our tweet fic contest! Do you want to know more about it? Find all you need to know here: http://press.futurefire.net/2022/06/noir-fire-microfic-contest-giveaway.html

TFF: What fascinates you?

VV: I will borrow the words of one of my favourite directors, François Truffaut, who was also a very insightful critic and an avid reader: “When the same things are funny and melancholic at the same time, it's just wonderful.” I guess I find fascinating the kind of art that achives that, that makes you a little sad, but leaves your heart warm nonetheless.

TFF: What is the new year’s resolution that you most epically failed to keep?

VV: To get to know the city where I’m moving to in a few months! I’ll look for books by local authors, ideally set in the city itself. If I’m lucky, maybe I’ll find a couple of noirs!