We interviewed Benjanun Sriduangkaew author of “We Are All Wasteland on the Inside” in the Noir Fire anthology. 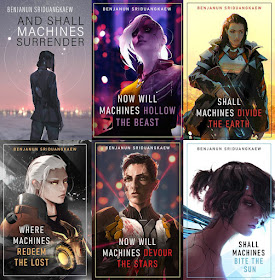 TFF: What does “We Are All Wasteland on the Inside” mean to you?

Benjanun Sriduangkaew: I really enjoyed writing the bleakness in it—it’s a pretty grim story all around, with nods to a kind of “Spirited Away but really, really dark and lesbian.” A lot of my fiction has a happy ending, but this one has a conclusion that refuses to absolve or soothe the protagonist. She will always be rejected by the magic forest.

TFF: Which elements of your writing (this story or others) are directly inspired by mythology and folk tale: settings, characters/creatures, tropes, storylines…?

BS: A lot are! In my Machine Mandate books, a lot of characters—AIs in particular—have names derived from Buddhist or Taoist concepts, or deities (Samsara, Klesa, Benzaiten in Autumn). And sometimes my story beats are influenced by Asian epics, with a lot of disguises and hidden identities.

TFF: Other than Noir and SF, what two (or more) genres would you like to see smashed together in a future anthology?

BS: Psychological thriller and SF, or giant mecha and magic.

BS: A new series after the Machine Mandate finishes in July, and collaborations with my co-author that’s turning out to be a really fun lesbian urban fantasy!