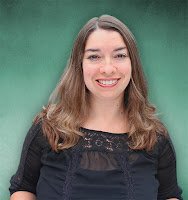 It is our pleasure to welcome on the pages of our blog Rebecca Gomez Farrell (author of the beautiful Good Genes in TFF#38), and chat with her about her upcoming fantasy novel Wings Unseen, published by Meerkat Press.

Rebecca Gomez Farrell conjures up short and long speculative fiction stories from her home in Oakland, CA, where she resides with her tech wizard husband and two trickster cats. Her debut epic fantasy novel, Wings Unseen, comes out August 22 from Meerkat Press. Her shorter works can be read in Beneath Ceaseless Skies, the Future Fire, and Bull Spec among other magazines. Look for “Treasure” in the Dark Luminous Wings anthology in Fall 2017. She also blogs about food, drink, and travel at theGourmez.com, and yes, she has opinions about candied bacon.
TFF: What makes your novel, and its characters, different from the other fantasy books that will be sitting next to it on bookstore shelves?

Rebecca Gomez Farrell: While Wings Unseen was borne from my love of classic fantasy, it is firmly rooted in today’s sensibilities in terms of feminism and social and political theory. There is centralized power, but there are also clear elements of democratic principles and their opposites. I see no reason why fantasy needs to follow the Medieval social order of our own world exactly – secondary worlds are not our own. So while the setting and world-building should be an easy fit for fantasy lovers, I hope they find it a refreshing take on the genre. Also, Wings Unseen is not a tale of big battles and clashes so much as it is an intimate journey in the minds of its main characters. It also constantly questions and interrogates the notion of destiny and free will. Are we required to follow the paths laid for us? What compels us to? 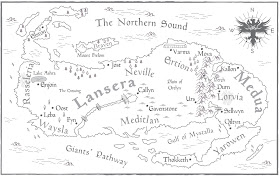 TFF: Both Good Genes and Wings Unseen involve issues of family loyalty and the demands that arise there from. Is there a conflict between the micro- and macro-political that these sorts of story help to explore?

RGF: Absolutely, especially in terms of the excuses that humans can make for perpetuating systemic injustice on a personal level. In Good Genes, Carl is the voice of the town of Enos, which has essentially forced its own citizens to give up their lives for generations for the “good” of their community. He does his best to explain why to the newcomers in town, but no amount of explanation could ever convince Rockie to give up her loved ones, no matter the cost to others, which is the exact same choice that Jonah makes over a century earlier that results in the culture Carl is raised not to question. On a grand scale, Wings Unseen explores the wisdom of a great compromise made to bring peace after a war, a choice that many have considered a “good” one for a long time. But the main characters, particularly Janto, must reckon how his grandfather’s decision to save lives through truce has resulted in a society that ultimately threatens lives in many new, and horrifying, ways. And Serra has perhaps the hardest familial and societal conflicts to reconcile on a personal level, particularly in the challenge of what helping her people means after the murder of her brother. 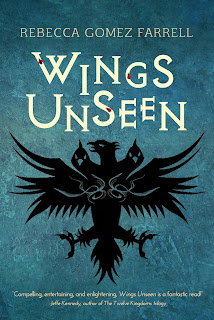 TFF: You also write as a food and drink critic. Do you ever cross the streams between gourmet blogging and speculative fiction? A food-themed horror story, for example.

RGF: The way I usually describe it is that the sensual aspects of my food and drink writing inform my world-building. Eating and drinking are such essential pleasures in life, or at least in my life! How could I write a story that doesn’t factor them in? The taste, texture, and smell of food memories are so evocative. Who is not going to relate to a character’s bite of a buttery, grilled bread with crisped cheese around the edges?  It’s a basic building block of a society – what do they eat and why? Even the less appealing aspects of food and drink leave an impression: the stink of an onion rotting in its own juices or the taste of sour milk. I think such details are a great way to invite readers into the world you’ve created, even if the cultures seem very strange to them. But yes, maybe I should get going on that story about a blogger who writes recipes with fake ingredients that keep appearing in her pantry after she posts…

TFF: What can fans of your writing look forward to next? What is the recent work you’d most like people to track down and read?

RGF: I would love to say a sequel to Wings Unseen! But I am only a few thousand words into that…which is more than I ever thought I would be as I intended it to be a standalone book! I am on the second draft of a post-apocalyptic romance novel, Natural Disasters, which I hope gets to the finished stage next year. My newest short story, a humorous sci-fi tale called Garbage, is available now in the charity anthology Through a Scanner Farkly. Treasure, a fantasy fable, will appear in the Dark Luminous Wings anthology from Pole to Pole Publishing in the fall.
Thank you Rebecca, good luck with all your literary projects and especially with Wings Unseen that will be out on the 22nd of August.
Valeria Vitale at 20:41
Share