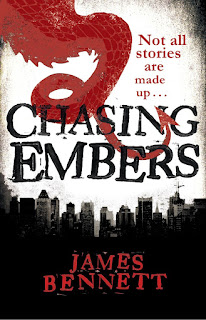 We’re delighted to welcome TFF author James Bennett, who is about to release his first fantasy novel with Orbit Books, a thrilling epic in which myth and urban modernity clash (preorder link), and that we’re really looking forward to read. James was kind enough to come and answer a few questions about his work.

James Bennett is a British writer born in Loughborough and raised in Sussex, South Africa and Cornwall. His travels have furnished him with an abiding love of different cultures, history and mythology. He's had several short stories published internationally and Chasing Embers is his debut fantasy novel. James is currently adrift around London before embarking on his next adventure and his next book…

The Future Fire: You had two stories published in TFF in 2005/6, ‘Lost Chapters: A fairytale’ and ‘Half Light House’ (which was also reprinted in the 2015 anthology, TFF-X). Which of these stories stands the test of time better, for you? What did it mean to you at the time you wrote it?

James Bennett: I did! Interestingly, I think ‘Lost Chapters’, a story about fairy tale characters trapped in an old book, holds a seed of the series I’m writing now, this idea of a supressed magical world just out of sight. Of course, that idea filters down from Narnia and no end of Fantasy novels that I read throughout childhood, but I like the idea of a known fantasy world, one that most of us aren’t privy to – a conspiracy between humans and the fabulous, if you will. But I think ‘Half Light House’ has aged better. You’re always learning and ‘Half Light House’, while an experiment at the time, was probably the first hint of me finding my voice. When I wrote it, I remember thinking, ‘God, you might actually be able to do this!’ And that’s a feeling I now encourage in all newbie writers. You know, push yourself.

TFF: You have a written many stories involving monsters (dragons, the African/European Monsters anthologies)—do monsters have a special fascination for you? Do they allow you to write themes or stories that purely human protagonists would not fit into so well?

JB: Weird as it sounds, I identify with monsters far more than I do with human characters. This kind of started happening as I was growing up and eventually matured into the Ben Garston novels. Monsters are underdogs. They live on the fringes. They deal with a lot of fear and the threat of violence. And some monsters, I reckon, don’t really deserve that reputation. Some are just trying to survive, pushed to the brink of extinction by a wantonly advancing civilisation. That’s what I wanted to speak to in these stories, to get under the skin of monsters and try to see things through their eyes. A human element creeps in, regardless. Maybe the whole thing is a metaphor. Sometimes humans are the most monstrous of all…

TFF: There is a lot of talk about inclusivity and diversity in speculative fiction at the moment, especially with the excellent Hugo results this week; how do you approach diversity in your work, perhaps especially in Chasing Embers?

JB: I’m really pleased about the Hugos results, particularly after all the attempts to derail the awards by others. I think Jemisin and Okorafor et al have displayed incredible fortitude and grace in the face of a lot of hateful crap flung at them. It’s truly admirable and when you read the work, you just know these writers have worked twice as hard as anybody else to get where they are, so it’s very well deserved. For me, I think things in fiction are slowly shifting and some of us writing now are coming from an entirely different place, a place where perhaps there isn’t as much privilege and inclusion, where there are different cultures around and experiences outside the ‘socially enforced norm’. I didn’t want to write an all-white, all straight, male-focused book set in jolly old England. I never will. It’s why I’m such an advocate of diverse artists speaking up for themselves and rising to share an equal platform in the mainstream genre, as in all walks of life. Ultimately, we’ll get more out of it. It’s a tremendously exciting time to be involved in SF.

TFF: What was the process of working with Orbit on your book like?

JB: Exciting! I’m lucky enough to be working with some of the best editors in the known world. Anna Jackson, Lindsey Hall and James Long have all been a fantastic resource of guidance and advice during the shaping of these books. Everything is a conversation and we all want the books to be the best they can be. On a personal note, it did take a little adjustment. You write for years by yourself with no deadline, without knowing if you’ll even be published or if anyone will read your stuff. Then that gets flipped on its head, so it’s a totally different game. You’re discussing your characters with people in London and New York, not to mention a handful of early readers. But it’s all good. It’s obviously preferable, for a writer.

TFF: How is the promotion for Chasing Embers going?

JB: So far, the response has been great. It’s such a simple idea, really, but it seems to catch on. We’ve had some successful Goodreads giveaways, I ran a Twitter competition that went down well and there’s going to be a nationwide competition from Orbit where readers can win a stack of cash, so that’s fun too. People have been incredibly supportive and that’s very humbling. You want to do your best. It’s heartening to see that we’re not bored of fairy tales yet, though like the genre itself, we’re going through a growing up phase, I think.

TFF: You’ve lived in a lot of places in your life, including recently stays in the wilds of Wales, urban London, and the fiery summer of Catalonia. Does this broad experience feed into your writing, do you think? 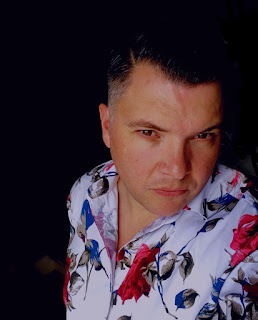 JB: Absolutely. But change is my constant, going back to my earliest memories. I was raised all over England and then when I was 11, we emigrated to South Africa. I’ve lived in Cornwall, Scotland and Holland. In the past year I’ve been across Russia, China and visited Istanbul. But it isn’t new for me. Growing up, I went to 23 or so different schools (I lost count) and I haven’t stayed in one house longer than 3 years in my whole life. At this point, when I’m not travelling or planning to travel, things don’t feel right. So yes, it all feeds into my writing. It’s the only life I’ve known.

TFF: In which city in the world are you most likely to meet a magical creature?

JB: Oh, they’re everywhere, aren’t they? Most of them are hiding in human skins. Dragons prefer London. Vampires tend to like Paris or Barcelona. Wizards love Berlin. Moscow has a fair share of goblins. China is full of ghosts. And Africa is where the gods sleep.

TFF: Where would you like to go back to, or what completely new place would you visit next?

JB: It’s rare for me to want to return anywhere. There is so much to see! London is kind of my hub, so I’m always swinging through there. I adore Paris and I could live in Barcelona quite happily for the rest of my days. But I’m going to check out the Americas next.

TFF: Chasing Embers is the first in a series: do you already know how the whole story will pan out? Do you plan first and then write, or write first and then mould? What non-spoilery hints can you share with us?

JB: You know, when I wrote Chasing Embers it started off a short story purely for fun. That somehow became a novel (yikes!), but hand on heart, when I got a book deal I panicked a little over Book 2. I’d only thought ahead in the vaguest sense and there is always the fear that you can’t top what you’ve already done. So my research increased and I put my heart and soul into the series as whole, thinking about where it could go, what journey lay ahead for Ben and the other Remnants, where it would all ultimately lead. So yes, I sketch out a railway, as such, but the train remains a colourful mess of ideas chugging along it. And I could even derail it at some point. Book 2 is a darker book, perhaps a more mature one, with higher stakes and graver consequences. Ben isn’t going to get away with anything. He broke the Lore. He’ll have to answer for that. Things are about to go up in flames.

TFF: Apart from the rest of this series, what are you working on next?

JB: I’m hoping to put together two collections of short stories for release late next year, tentatively titled Exploding Myths, which are spin offs from the Ben Garston world, and Other Stories, which will collect, well, my other stuff, mostly spooky with some noir and a dash of satire thrown in. This is only a loose idea at present, however. Apart from that, like most writers, I have more ideas than I probably have time. I’d like to write a historical fiction/horror novel that’s been bubbling away for a while now. Watch this space.
James Bennett will be signing books at the official launch of Chasing Embers at the Forbidden Planet Megastore on Shaftesbury Avenue, London, on September 10th between 1–2pm. All welcome!
Djibril at 13:11
Share