We’re very happy to welcome to the TFF Press blog author Alexandra Seidel, whose “The City, My Love” we published in TFF#57 earlier this year, and who also writes steamy, speculative romance as Alexa Piper. She joins us to answer a few questions about her work, and also share some snippets from her recent publications.

Alexa Piper writes steamy romance that ranges from light to dark, from straight to queer. She’s also a coffee addict. She loves writing series, and her Fairview Chronicles follow a ragtag gang of supernaturals who try to make their city safer. Mostly. Her second series, Dusk & Dawn, explores banter and the trappings of a world in which Vampires, Werewolves, and the Fae live alongside humans. Elvenswood Tales is a new series that expands the Fairview universe.

The Future Fire: Your story “The City, My Love” is both a love story from a city and a love letter to historical urbanism all in one. Is there a city in your life that you immediately felt a special connection to?

Alexandra Seidel: Oh, there are a lot of cities I adore! I’m lucky enough to live in a place where it’s easy to travel to some of the bigger ones in Europe, although the list of cities I still want to see is long. The city I may have visited the most is Prague, and it’s a strong inspiration for New Elvenswood, where one of the series I write as Alexa Piper is set. But perhaps the city that really charmed me with its difficult to love character is Beijing. To me, as a Westerner, it’s a place of contradiction, a reflection of the people and politics around it. Maybe because of that, its character is so strong and memorable. And yes, it made it into one of my books as well.

TFF: Cities can sometimes make people feel swallowed and invisible. Is there a piece of urban cultural heritage that you like, and that reminds inhabitants how they are part of the place’s history?

AS: Personally, I love architecture. Don’t get me wrong, I don’t know much about it, but buildings that have been there for a few hundred years and show it just have something about them that always draws my eye. It’s no wonder that the city in “The City, My Love” feels like it does about its buildings. In terms of connecting the people with their city, there is a so-called Schuttberg or rubble mountain in Munich, which is where the rubble, left behind by the bombs of WWII, was collected. It’s now part of a park, it’s green and from the looks of it, you wouldn’t know how many individual tragedies are connected to it. It certainly is a way to maintain a connection with the past for the inhabitants.

TFF: In The Hunting Mates you explore an unlikely genre crossing, between romance and noir. How did you manage to harmonise the feeling of bleakness that fills noir stories with the cozy promise of a HEA?

AS: That’s an interesting thought. See, it never occurred to me that you need to harmonize anything here. A HEA (happily ever after, for all those who are less familiar with the romance lingo) offers the promise of a happy relationship after the book is done. I feel like a strong, healthy relationship can thrive even if the outside circumstances are dire, even if characters have a dark past or demons that haunt them (which I don’t mean literally, but sure, I can see myself write someone literally being haunted by a demon. Let me know if you think that would be a good idea!) The one is the outside world, the other is the relationship between characters. Maybe it’s because I don’t think the former can ruin the latter that the romance works out as it does, even gets stronger as two characters go through life together.

AS: Let me quickly clear up that erotica and romance are not the same thing, and what I write as Alexa Piper is steamy romance.

I’m not exactly sure how to answer this question! I mean, as far as logistics are concerned, we have the basic male and the basic female configuration to work with. Yes, Loved by a Kraken offers additional appendages, but that’s why it’s fun. And yes, I sometimes have multiple pairings (two sexy guys and one sexy gal in Bonfire Bright, the latest in the Elvenswood Tales series,) and the line editor mentioned she was tempted to break out dolls to follow the blocking, but for the most part, I’m not reinventing the wheel there. One thing I use to strengthen a character’s viewpoint is how they see the world; my snake demons are sensitive to temperature, my siren understands the world around him by sound as much as sight, and the kraken demon mentioned earlier gets a lot of sensory input from his suckers.

TFF: Your Fairview Chronicles series combines fantasy, crime and comedy. There is a famous saying: “It’s easy to make people cry, it’s making them laugh that is difficult.” Would you agree?

AS: I’m going to say yes. And I’m going to tell you a secret. I don’t really try to make anyone laugh. I mean, have you been keeping track of the body count in my books? I’m worse than Shakespeare trying to write a teenage love story when it comes to the body count, I assure you. It’s the voice of the characters and the kind of narrative that makes the humor happen (I once wrote a joke into a book and I didn’t even notice I did that until a proofer pointed it out.) I mean, in A Naughty Creation, I have a reanimated corpse who is very committed to cleanliness and cutting the heroine’s heart out. That should not be funny, right? I didn’t try to put any jokes in there, and I swear I don’t know where those flying eyeballs came from. These things just happen, much like demonic possession and projectile vomiting. It’s life.

TFF: Speculative fiction is often seen as a convenient medium for discussion of social justice issues, because it purports not to be about the real world (while of course it is). Is this something that works for you? Are there other stories about the real world that SF allows you to tell?

AS: I think fiction is an outlet that allows any kind of story to be told. That being said, I’d like to point out that writers don’t always try to do that. I don’t set out with an agenda in my head, and I don’t aim to write manifestos. Yet, our personal experiences will inform the way we think about any given situation, real or imagined. In my case, that is not always conscious or intentional, but I can certainly see it in my own work once I’m done writing.

TFF: How do you go about attributing personalities to inanimate objects or places? Are you led by their material qualities and physical details, or by the overall narrative?

AS: This question really wants to be answered with an easy to follow, step-by-step process. Except I don’t have that. For “City,” it just happened. I sat down, and the story wanted to be told like this, in that particular voice. I have a scene in Arrow Struck that is told by flowers in a garden (it’s a fight scene,) and that just happened without me planning it like that. Stories, like cities, are things that grow, and not always like you expect them to.

Thanks for joining us, Alexa! And good luck with the latest novels.

Just a quick note to let you all know that if you subscribe to the TFF Press blog by email using the old Feedburner service, that service will be disabled in the next couple weeks. (Not our doing—Goog just decided to retire the only feature of Feedburner that anyone I know uses!) There are other RSS-by-email services available, should you choose to migrate your subsciption. We have added a new “Subscribe by email” form to the sidebar to the right, using the Blogtrottr service. We hope you'll continue to follow the TFF Press blog, one way or the other.

“I said, ‘I’m not in trouble about being gay but I do have trouble identifying with those queens,’ and then a queen overturned that police car and changed my life.” 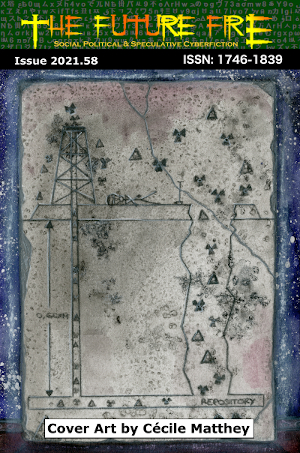 Full issue and editorial at futurefire.net/2021.58